Recently, we visited Rhode Island and fell in love with the gorgeous  ‘Ocean State’. A tour of the Newport Mansions had been on my ‘bucket list’ for a long time. We were not disappointed. A day spent on Mansion Row is like opening the gates of time and going backwards for a glimpse of privileged life at the dawn of the 20th century. The natural, autumn RI beauty was magnified by the size of the elegant homes, well-tended gardens and rugged coastline. The colorful stories of lives lived within the mansions, both happy and sad, were as though straight from a fascinating historical novel.

Usually, my husband patiently trails behind me, and my camera, on floral adventures. He is somewhat mildly interested and always ready to head for home. In route to the Providence airport for our flight to Atlanta, he surprised me by commenting “Good call; we probably should have stayed another day”.  Obviously, we both loved our visit to the smallest state.  I hope you will enjoy a visit to Rhode Island and the Newport Mansions, as well. 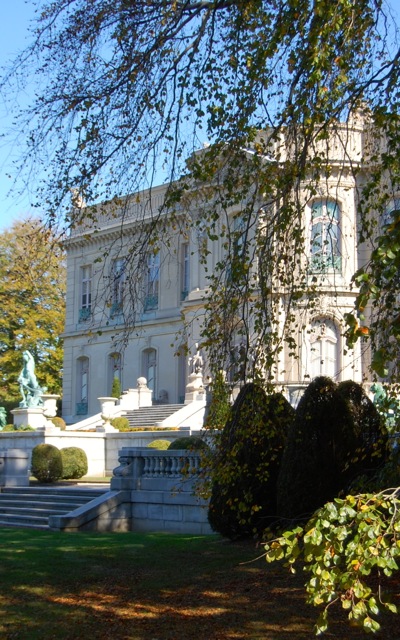 The first stop on our tour was The Elms. This stately home was the summer residence of Mr. and Mrs. Edward Julius Berwind. It was completed in 1901 at an approximate cost of $1.4 million from fortunes made in the Pennsylvania coal industry. The grand house was named for the beautiful American Elms that originally grew on the grounds. 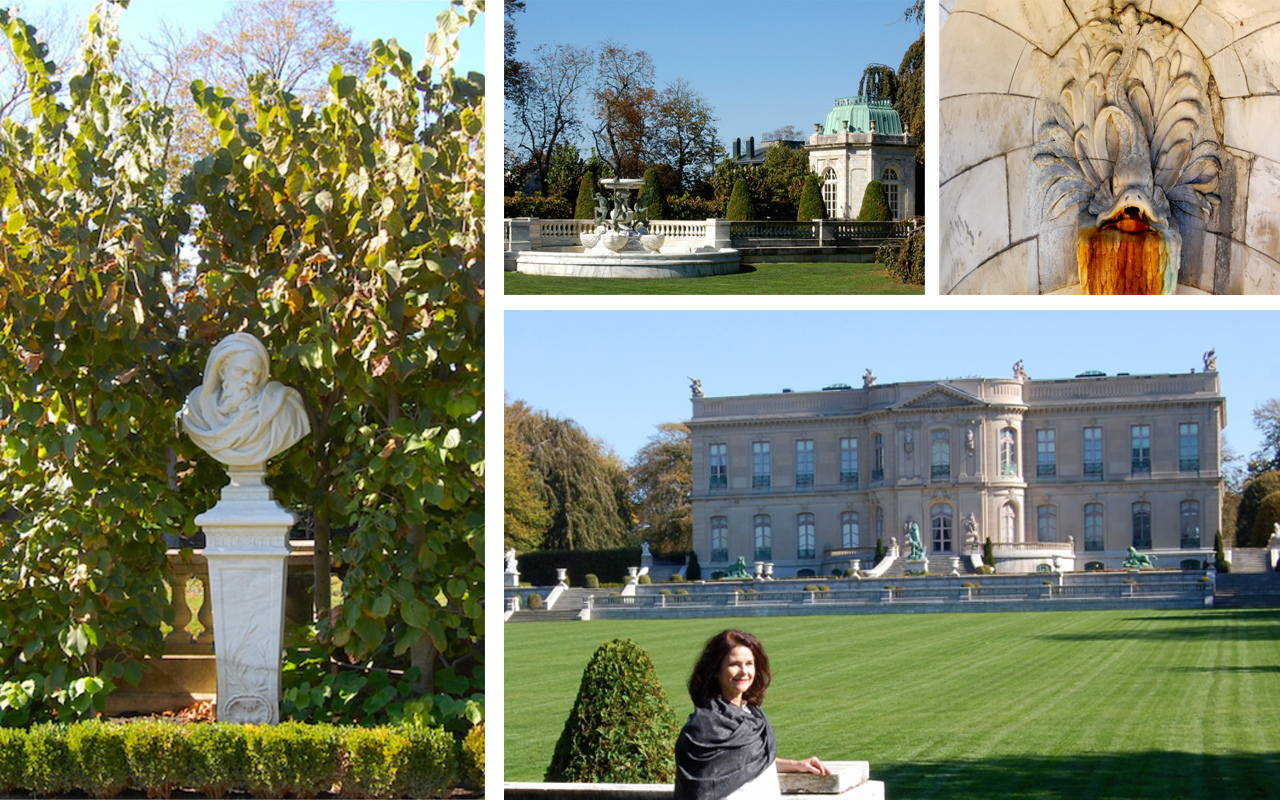 The grounds of The Elms in Newport, RI.

Between the years of 1907 and 1914, elaborate Classical Revival gardens were installed at The Elms. From the grand terraces of the house, you can see across the open park to the lower garden featuring marble and bronze sculpture, marble pavilions, fountains, a carriage house, stables and eventually a garage. The garage featured a turntable for the car that allowed it to turn and go forward – no backing out necessary. 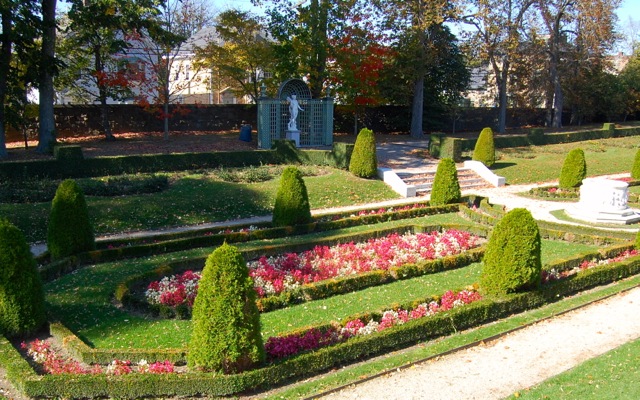 Lower Garden of The Elms

The Elms grounds were considered to be the best of the Newport gardens. Of special interest to us, was the beautiful sunken garden. It provided fresh flowers to be used in the home daily. I can only imagine how pretty it was in during the summer social seasons that took place in Newport in the months of July and August. During these eight weeks of ‘the season’, the cost of parties, hosting guests, boating and sporting activities, and nine costume changes daily for the women – could cost a family the equivalent of a million dollars in today’s money. 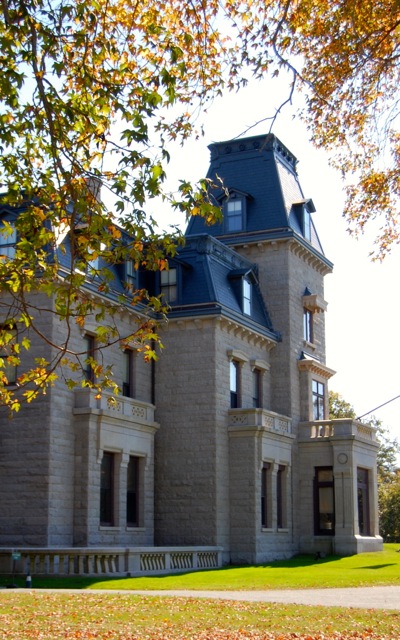 Chateau-sur-Mer, the first of the Mansions of Newport, RI

Chateau-sur-Mer, built in 1852, was the first of the Bellevue Avenue Mansions. This row of impressive homes set the stage for the lavish lifestyles and grand parties of the Gilded Age of Newport (1865 – 1914). Chateau-sur-Mer was unique in that it was the year-round residence of William Shepard Wetmore, a New Englander who made his fortune from merchant trade in China. This Victorian home was the largest of the area mansions, prior to the building of the Vanderbilt homes in the 1890’s. 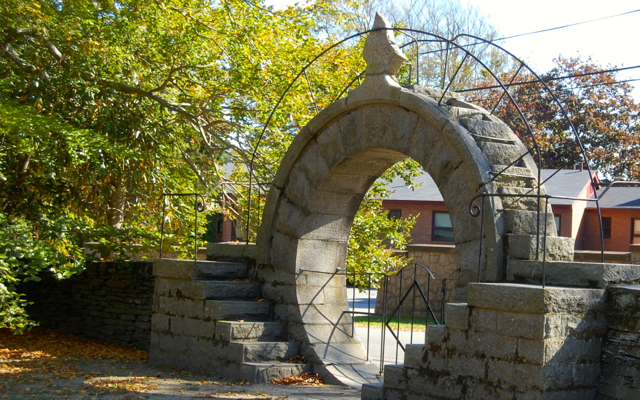 A special feature of Chateau-sur-Mer was the Moon Gate at the southern entrance to the property. Some say the gate was built so that Wetmore could view the ocean in the moonlight, from this vantage point. If so, local houses block that view now.  Yet, others claim that the upper seat of the gate was a Monkey Seat. Supposedly, monkeys Wetmore brought back from the Far East sat at the gate and alerted him to the appearance of visitors.  Whatever its original purpose, it remains intact and a charming feature of the grounds today. 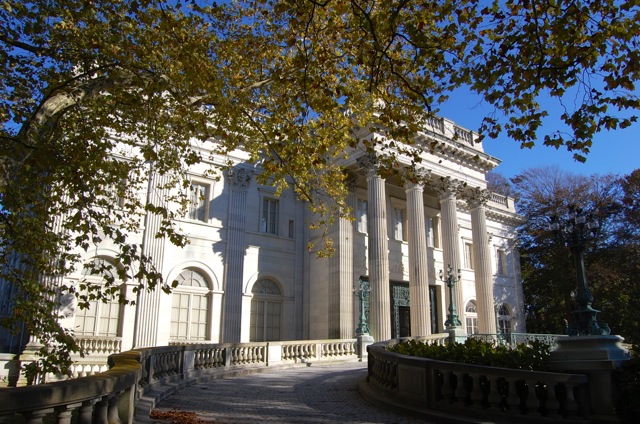 Marble House, constructed from approximately 500,000 cubic feet of marble, was completed in 1892 at a cost of approximately $11 million. It was the gift of William K. Vanderbilt to his wife, Alva, for her 39th birthday. Shortly thereafter, they divorced; she remarried and lived on the same street in Belcourt Castle. Upon the death of her second husband, she reopened Marble House. 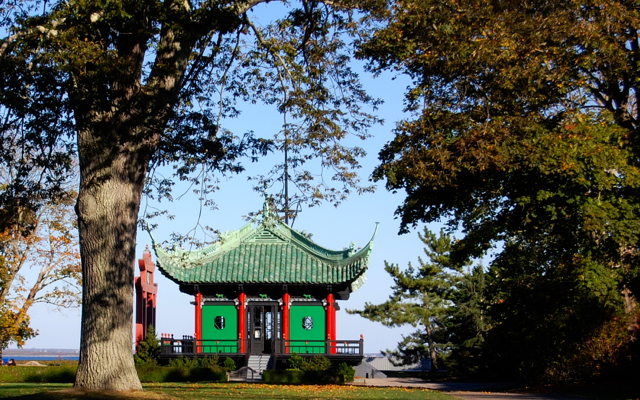 After reopening Marble House, Alva built the Chinese Tea House. Completed in 1914, it stood at the back of her generous lawn on the cliff of the sea.  As Alva, the socialite, evolved into a social reformer she began hosting rallies for Women’s right to vote. She opened the Tea House by hosting a conference for women activists. It became the site of many  ‘Votes for Women’  rallies.  We enjoyed a light lunch and cup of tea in the Tea House while taking our tour of homes. 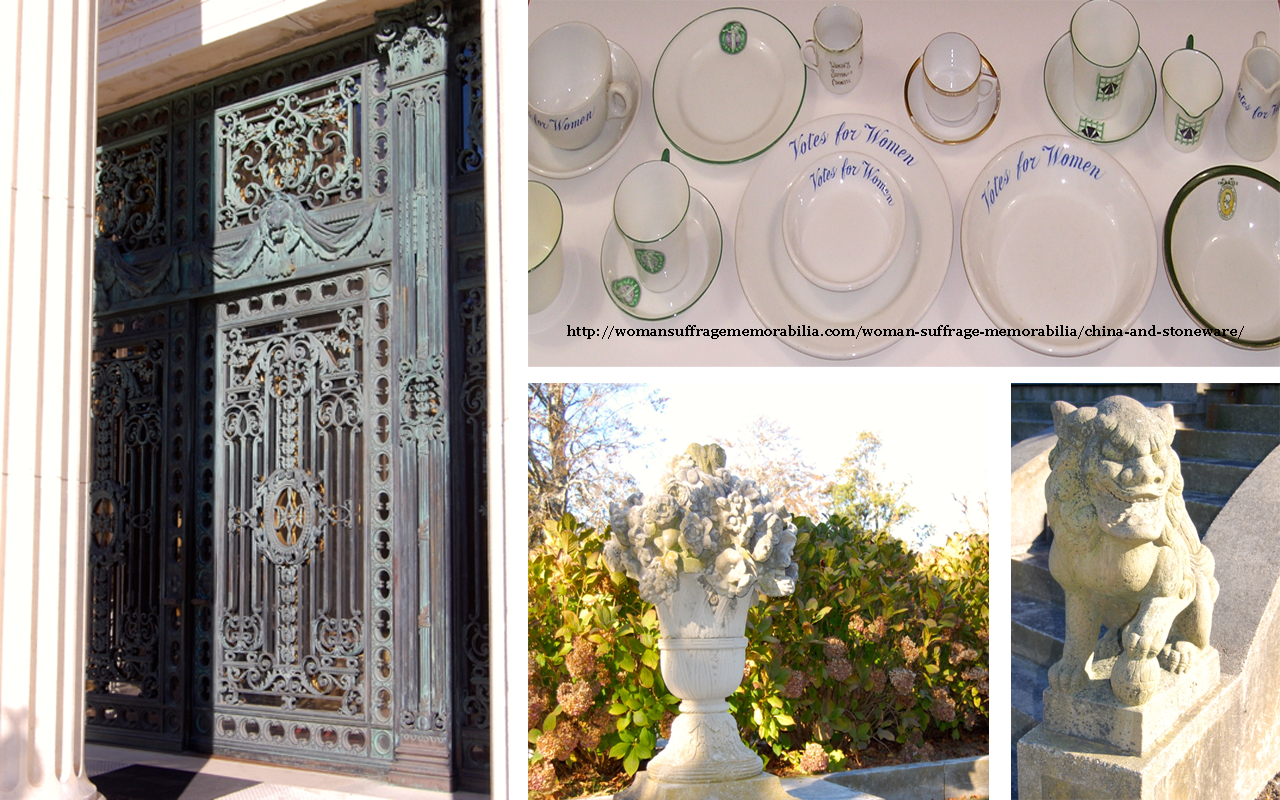 Intricate details of the Marble House in Newport, RI

Noticeable in the displays of family china were stacks of dishes imprinted with ‘Votes for Women’. These were commissioned by Alva to commemorate the 1909 women’s suffragette rally she held there. Other interesting features of the house include exquisite French Baroque doors weighing one and one-half ton each and detailed statuary throughout the property. 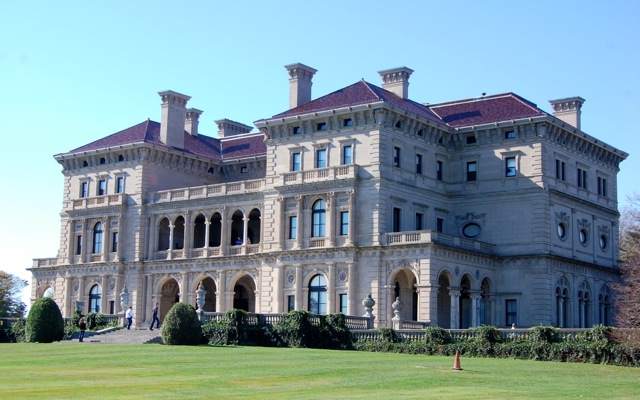 The Vanderbilt home, The Breakers.

The Breakers is the most well known and grandest of the ‘summer cottages’ on Mansion Row. Money was no object when this 137,000 square foot vacation home was being built from the from family railroad fortunes of Mr. and Mrs. Cornelius Vanderbilt II.  The 70-room mansion features 65,000 square feet living space, alive with the activity of seven growing children running through the ornate house and well-manicured grounds. In spite of the size of this house, we sensed there was a loving connection between mother and children and the interaction of family life took place here.

In addition to the Vanderbilt Breakers, we had previously visited The Biltmore House in Asheville, NC – the 178,926 square foot ‘mountain house’ of George Vanderbilt.  During this tour, we visited The Marble House – the home built by a Vanderbilt couple that later divorced, leaving the ex-wife and children living in the house. We observed that the Vanderbilt families obviously knew the meaning of the terms ‘living large’ and ‘living well’. 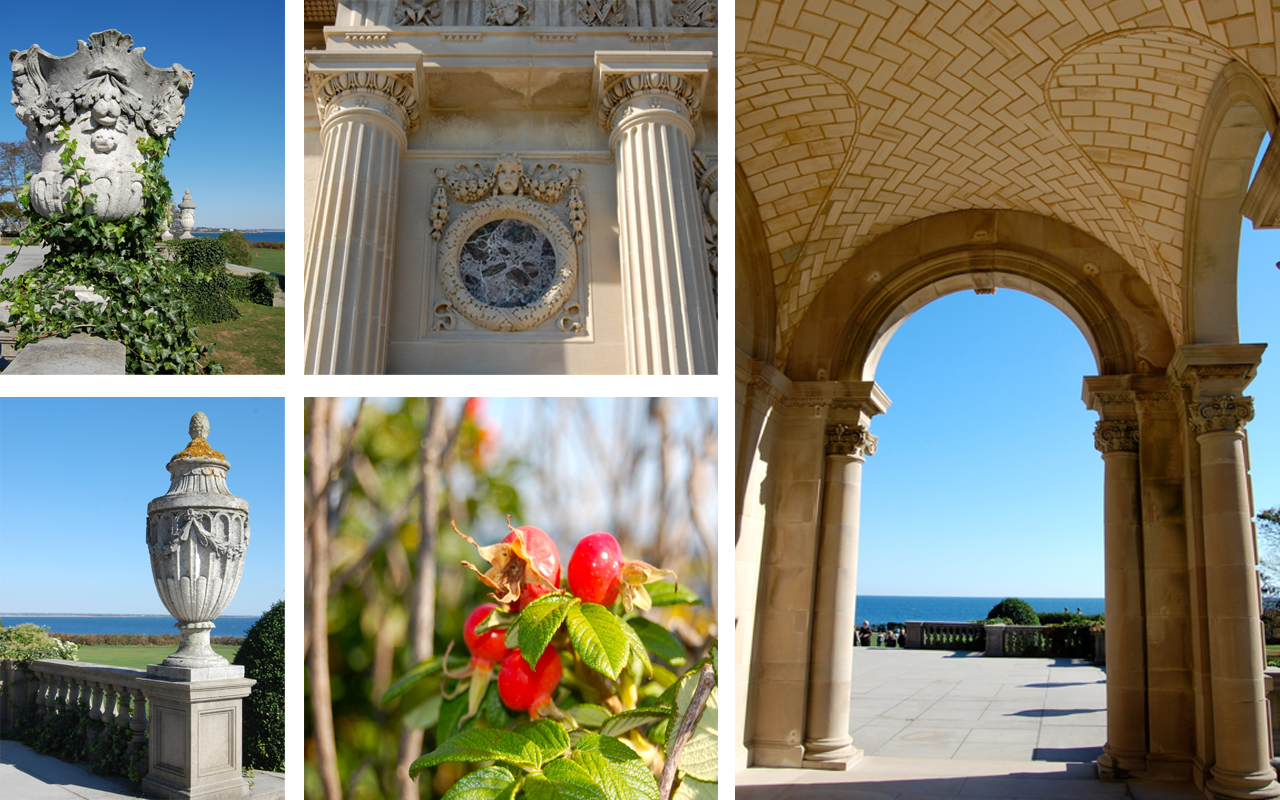 The artisan details of The Breakers are impressive.

The intricate detail crafted into the building’s architecture is amazing. It lives today as a testament to the skill of the international craftsmen who were hired to bring it to life. Household treasures such as delicate linens, fine china, and family silver were most likely transported back and forth to New York each season, as was the case in many of the summer homes.  Usually, most of the fine furnishings were simply covered in white cloths to wait for the next social season by the sea.

Rose hips remain at the property’s edge overlooking the Atlantic Ocean. These remind us of the stories told of armloads of fresh roses cut weekly from the two-acre gardens to add fragrance and beauty throughout the house. This indicates their attention to the appreciation of even the smallest details of quality life. 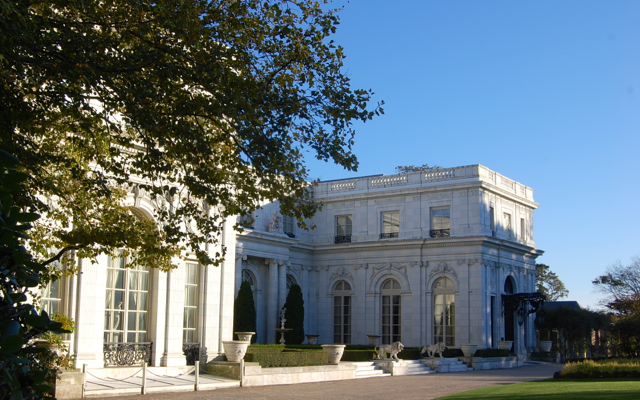 Fragrant roses filled the halls of Roseciff during social events.

Rosecliff was completed in 1902 for a mere $2.5 million. It was a social hub in Newport as it featured the largest ballroom on Mansion Row. Roses from the gardens of Rosecliff were used to enhance the beauty of these large social events. While the summer was a season full of fun and gaiety, it was at the same time a life of very specific rules. There was a very prim and proper set of daily rules regarding schedules, acceptable activities for males or females, appropriate conversation, fashion, and personal behavior that was to be followed by every member of the family. This restraint was at times difficult for some of its more avant-garde  residents, such as silver heiress Theresa Fair Oelrichsthe, the owner of Rosecliff. Keeping the ‘Gilded Age’ image of the family intact was like a full time job for those busy days. This could require the help of as many as forty servants depending on the size of the family, house and grounds. 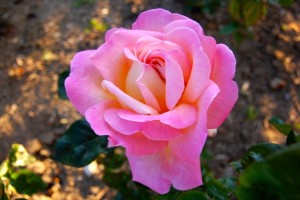 Rosecliff was known for its beautiful roses 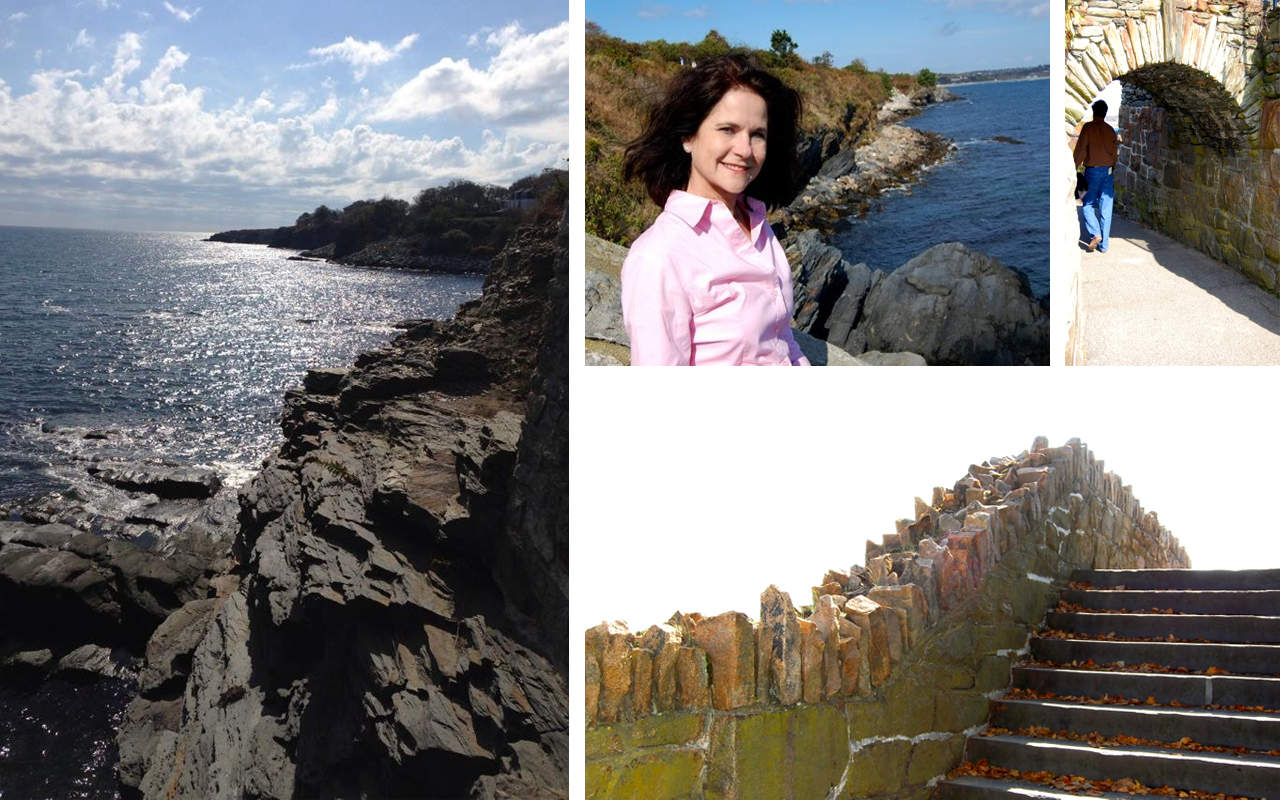 Perhaps one of the reasons the rocky area held such interest for me is that I have always loved historical novels. You know how the mystery goes – the fog rolls in, the distressed mansion-dweller goes to a cliff walk and searches the sea for answers. Just then a villain (typically the cause of their problems) creeps up and pushes them to their demise. Avid readers often wish to see one of those types of intriguing places for themselves. While there are cliff walks around the world, the one on Narragansett Bay, RI was one I wanted to see most. Of course, I was very careful. I did not stand too close to the edge or allow myself to get lost in my thoughts. Most importantly, I kept a cautious eye out for menacing villains and to avoid the dangers of fog, and I made sure to visit on a clear, sunny day. LOL. We loved the natural beauty of the cliff walk! 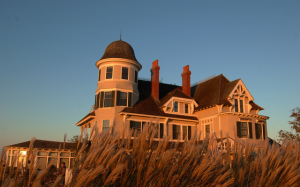 Castle Hill reflects the glow of sunset in RI. 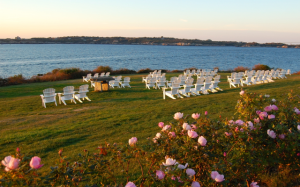 Gathering to view the sunset is popular at Castle Hill, RI.

Upon the recommendation of locals, we experienced a very special treat in the waning hours of daylight. We drove up to the end of historic Ocean Drive to visit the 1890’s Castle Hill Lighthouse. We enjoyed a glorious Rhode Island sunset. This is such a popular pastime for area residents that seaside seating awaits the guests and restaurant patrons of Castle Hill Inn. 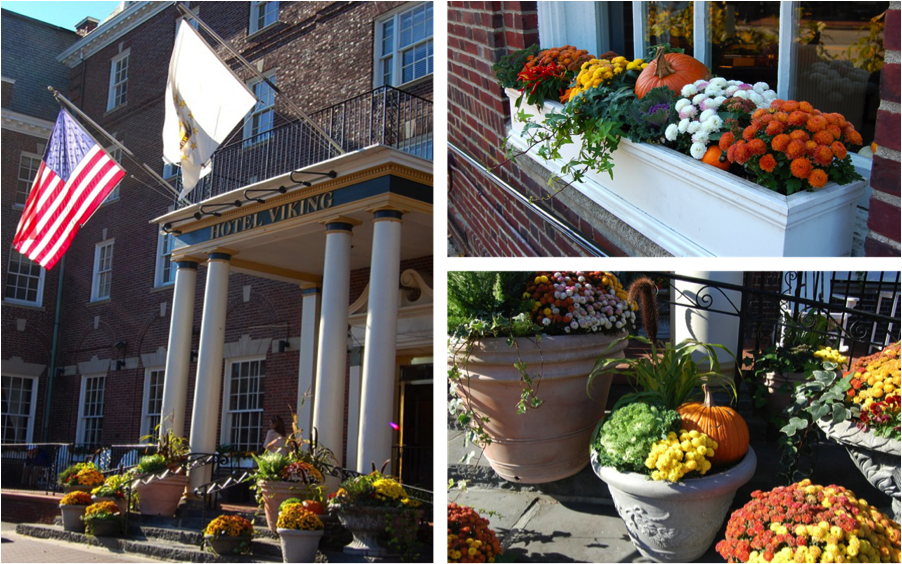 Enjoy a leisurely visit to the Viking Hotel of Newport, RI.

When it comes to Newport accommodations, I can highly recommend The Viking Hotel in Newport. We had an enjoyable experience in both the hotel and restaurant there. It was an easy walk from the Viking to stores and restaurants nearby. Among our personal favorites were – dinner at the Moorings and lunch on the waterfront at 22 Bowen’s Bar & Grille.

FLOWER-SAVVY DESIGN TIP – Check out at the clustered pots and window boxes of the Viking Hotel in the above photo and notice how they used seasonal materials, such as mums and pumpkins, to create welcoming vignettes of color. You can use this idea to decorate outside the entrance of your home or business, as well. For other seasons, picture birdhouses tucked into groupings of brightly colored blooming plants for spring and summer displays or mass Christmas greens, berries, cones and twigs around lanterns for a wintery effect.